What now? You might be able to find a more up-to-date version using the search function. This series will no longer be checked for updates. If you believe this to be in error, please check if the publisher's feed link below is valid and contact support to request the feed be restored or if you have any other concerns about this.

by Nicole Kelley | One Thousand Words 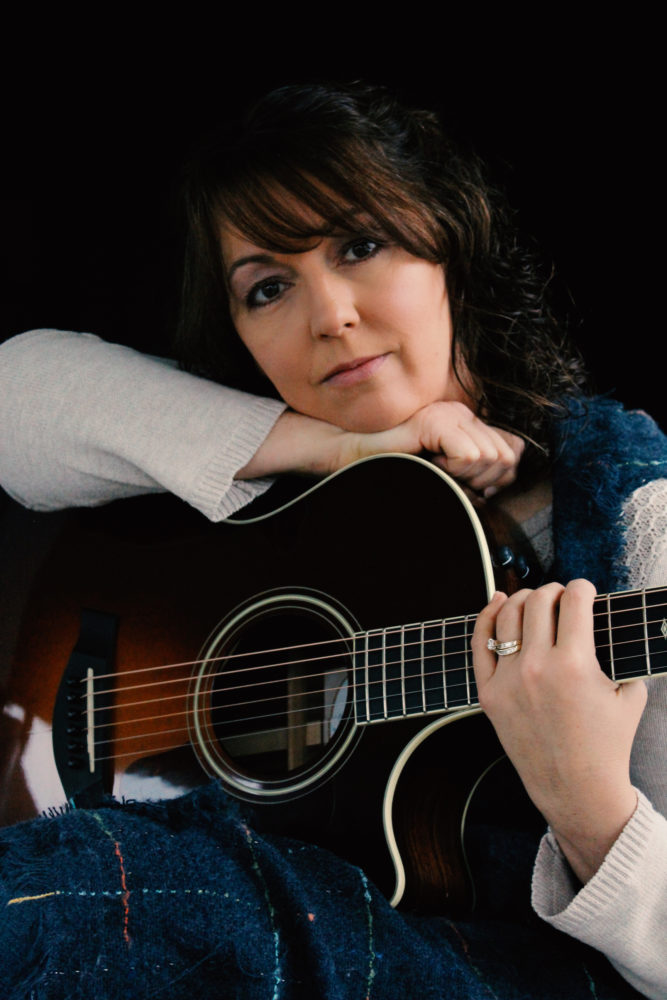 I like to describe Nicole’s music as a mix between Rich Mullins and Lori McKenna. There’s also definitely a bit of Sara Groves in there.

Nicole is married to Scott and they have four kids that they, and I quote, “not only love to pieces, but also really really like!” And, burglars beware, they’re house is guarded by 9 whole majestical furious pounds of Pom-Chi named Petey.

Nicole’s newly released album “Canyon Wide” is a beautiful collection of original songs that explore the faithfulness of Jesus across life’s many failures, griefs, and joys. Nicole’s thoughtful, carefully crafted lyrics are delivered in a most human and disarming way. Through these songs, Nicole proves to be both a wise mentor and a good friend.

To order a physical copy, email her: info@nicolekelleymusic

I feel like there are a lot of stories in the Bible that are often repeated, easily preached. We all have our favorites. What are some of yours? We hear about Daniel in the lions’ den or Shadrach, Meshach and Abednego in the fiery furnace. We see Jesus healing the leper, raising Lazarus, talking with Nicodemus about being born again. We speak of Paul on his road to Damascus…the list goes on.

And then there are the exploits of our 100% all-in apostle Peter. We see him fishing; we see him chopping off a guy’s ear with his sword. We hear him speaking in Acts, bravely testifying of the Word he has seen, the one he says is the only name under heaven by which we must be saved. Brave words in the polytheistic culture of the Romans, as well as in the “how-can-Jesus-be-God-when-Israel-only-has-one-God” culture. Those words are equally brave today.

It’s interesting to me that these aren’t really the stories that Peter is most known for, am I right? It seems like Peter is most famous for two things: almost sinking while walking on the water (let’s be honest; isn’t that the part we usually talk about?), and denying Jesus three times.

I wonder if one reason we preach and talk so much about Peter’s denial of Jesus is that it seems like the one thing about Peter that we can best relate to. We can find ourselves in his story so easily because, well…we see how our behavior continually falls short of what someone like Jesus would deserve, if we could serve him the way he deserves to be served. Wait. Or is it, “if we could serve Him the way we think he wants us to serve him.” There is a difference. One that keeps us continually disappointed not just in our behavior, but in ourselves. And because we are disappointed in ourselves, that must mean that He is too.

What does Jesus really want, anyway? Whatever it is, we “know” we don’t have it to give, and yet it feels somehow he expects it. But how does Jesus feel?

Let’s fast forward to the scene in John 21, which is without a doubt my favorite scene in the entire Bible. It’s the one where Simon Peter, Thomas, Nathaniel, Zebedee’s sons and two other disciples were together at the Sea of Tiberius.

Peter decides he’s going fishing. The others say, “We’re coming with you.” They fish all night and catch nothing. This is the story of their lives it seems, but I suppose their good fishing trips weren’t particularly noteworthy, so why write them down in the Bible, right? Let’s continue…

When daybreak comes, Jesus is standing on the shore, but the disciples don’t know it is Jesus. He calls to them, “Children, have you no fish?” They say no. He tells them to cast to the right side of the boat and they will find some. So they do, and they can’t haul the nets in because of the large number of fish.

Why would he say such a thing? Was it because that’s what he knew he should say? No. He said it because he knew it firsthand. His experience of Jesus from hanging out with him for a few years was, “this is Jesus, and he loves me.” Jesus loves me. This I know. And this love from his Teacher defined him. It RE-defined him. It displaced every other way he might use to identify himself throughout all of his books and letters to the early church. He is simply “the disciple Jesus loved.” And he passes that love down to all the “little children” he writes to in his letters. We are those “little children.”

So back to Peter: John says, “Hey Pete! It’s the Lord!” And dear, amazing, color-outside-the-lines Peter, what does he do? He ties on his outer garment that he had taken off for fishing, and in true Peter fashion he throws himself into the sea. No paddling with an oar, no thought for the boat, his friends, the fish that would be their income for that day. He is focused on one thing, and one thing only: the Lord is there. Anything between him and Jesus, watch out.

What kind of heart does that? And what sort of things would make a person jump out of a boat and leave everything just to get to your best friend and hero on the shore?

Whatever it is, does it look like there is any shame in him? I don’t see any. I see excitement, confidence, and reckless abandon, and this from the man who swore he would never deny Jesus then turned around and did it three times in a row. Immediately after that, we see him weeping bitterly. But now he’s throwing himself into the water, because the boat is just too darn slow.

What happened between Jesus and Peter to bring him to this moment? SOMETHING HAPPENED. Jesus happened.

Maybe it’s our culture, or maybe it’s just human nature, but I feel like it’s more popular to preach on Peter’s denial of Jesus than it is to watch Peter swimming like crazy for the shore. Why is that?

I wonder if it’s easier for us to relate to the shame and disappointment of Peter, as he tries his hardest to live out loyalty from a weak flesh, but in his words and actions he denies the Lord. Repeatedly. And then he leaves weeping bitterly—and some of us add, “beating himself with a stick.” I wonder if some of us get stuck at that place in the story, because we feel like we live there. We build a summer home in shame and despair, and we might even feel that “Failure” is essentially who we are.

If we were to hear a modern sermon preached on John 21, I feel like it might go something like, “God commands us to throw ourselves into the lake and swim. We are commanded to glorify him by fishing all night if we have to, and never settle for just riding in a boat. Train hard, swim hard for God.” That’s an exaggeration, but am I right that this kind of viewpoint is pretty common in our culture? Here’s the thing: Peter didn’t do that because he was commanded to do it. I think he did it because he wanted to be close to Jesus. Jumping in and swimming was the expression of his heart in the presence of Jesus. I think that speaks more to the weightiness of who Jesus is, reflected by a heart who has experienced his friendship, his care, his love…his pleasure to give his kingdom to his “little children.”

Whatever happened after that horrible night of denial, whatever Jesus said to Peter after his resurrection, it took that shame and embarrassment away. Permanently. John 21 is a scene of contradiction to any narrative that would say otherwise. What happened with Jesus? Could it be that Jesus helped Peter to see that “you are not what you do,” and called him a man after God’s own heart? Maybe he simply said, “I love you. You are mine, and your sins are forgiven. I am not ashamed of you, and you can’t mess that up.” What do we need to hear from him? What would help us let go of our own shame or discouragement? What might cause us to throw ourselves into the lake and swim like crazy just to be near him?

My friend, you are near him, because he is near to you. What do you need to hear from Jesus today? If you are his, then you are God’s “little child.” You are the disciple that Jesus loves. And that is all you ever need be. And if you find him on the shore cooking fish and inviting you to breakfast…he is most glad to see you!

1d ago1d ago
Subscribe
Unsubscribe
שבועי
Heritage Baptist Church exists by the grace of God and for the glory of God, which is the ultimate purpose of all our activities. We seek to glorify the God of Scripture by promoting His worship, edifying and equipping the saints, evangelizing the nations, planting and strengthening churches, calling other assemblies to biblical faithfulness and purity, encouraging biblical fellowship among believers and ministering to the needy, thus proclaiming and defending God’s perfect law and glorious ...
F
Fr. Larry Richards of The Reason For Our Hope Foundation Podcast

8h ago8h ago
Subscribe
Unsubscribe
יומי
Fr. Larry Richards is the founder and president of The Reason for our Hope Foundation, a non- profit organization dedicated to ”spreading the Good News” by educating others about Jesus Christ. His new homilies are posted each week.
A
Aspire Church Manchester UK - Sermons

18h ago18h ago
Subscribe
Unsubscribe
שבועי
Live recordings of the sermons preached at our regular services here at Aspire Church, Manchester UK. For more information visit our website at http://www.aspirechurch.co.uk or email info@aspirechurch.co.uk
I
Insight for Living Daily Broadcast

4m ago4m ago
Subscribe
Unsubscribe
יומי
Join the millions who listen to the lively messages of Chuck Swindoll, a down-to-earth pastor who communicates God’s truth in understandable and practical terms—with a good dose of humor thrown in. Chuck’s messages help you apply the Bible to your own life.
D
Discerning Hearts - Catholic Podcasts

19h ago19h ago
Subscribe
Unsubscribe
שבועי
Thank you for joining us for another great podcast today! Here you'll find many encouraging and challenging messages to help you build a life of significance! Keep coming back to listen to all the latest messages from Hillsong Church Africa. We would love for you to rate our podcast, subscribe, perhaps write a review and share the channel with all your friends to help us build a Church that Builds a nation and a continent.
J
Joyce Meyer Enjoying Everyday Life® TV Podcast

4h ago4h ago
Subscribe
Unsubscribe
יומי
The Urban Alternative is the national ministry of Dr. Tony Evans and is dedicated to restoring hope and transforming lives through the proclamation and application of the Word of God. To support this ministry financially, visit: https://www.oneplace.com/donate/222
F
Family Talk on Oneplace.com