As versatile as helicopters are there are still tight places where they just can’t land to get people in or out. For overwater flights, rescue teams and some utility operations that means using a hoist or under-slung line to reach someone. A hoist fitted helicopter is not always avaliable. Hence we have the considerations that go into Human External Cargo (HEC) where people are flown on the end of an extended line attached to the helicopter belly hook(s).

Jeff Yarnold is VP of Operations at Boost Human External Cargo Systems, a company that he co-founded in 2013. In the interview Jeff goes into the Transport Canada grounding of Human External Cargo equipment that was avaliable at the time and the search and eventual manufacture of a certified solution.

When conducting external load flights with underslung equipment or stores as pilots and crews we want the ability to quickly release the load should that be required to ensure the safety of the aircraft. As long as the released load does not hit someone on the ground then it may be expensive but is an accepted risk of that type of cargo carriage. The load is expendable. The release control is almost always located on the cyclic and requires minimal effort by the pilot. Inadvertent releases are rare however can occur. Either through human error or a failure of the hook system. 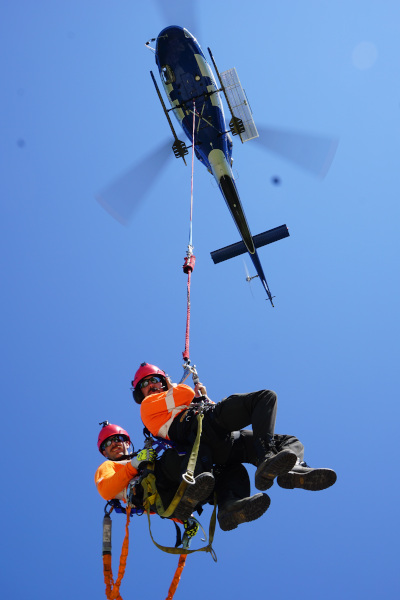 Now with people on the end of the line that could find themselves inadvertently fall free of the helicopter the acceptance of risk goes way down and additional measures are required. The previous solution (which is still used in different jurisdictions) was to fit a ‘belly band’ through and under the helicopter cabin to provide another backup anchor point to the line and its attached humans.

The advantage of the belly band solution was that it was extremely portable and could be fitted to a wide range of helicopters used in the external load role. It was this belly band solution that Transport Canada grounded due to concerns about its certification and fitness for purpose.

The North Shore Search and Rescue organisation in British Columbia that Jeff still works for, found themselves without a viable way to effect many of the mountain rescues in their area of responsibility. Necessity being the mother of all invention… Jeff and his business partner Derek set about designing a solution.

In this podcast we go into:

Links from this week’s episode:
Support the podcast on Patreon
Boost Human External Cargo Systems – This is Jeff’s company producing role equipment for the HEC market.

Do you have a question for Jeff or tips from your own experience? Be part of the conversation by leaving a comment below.

18m ago18m ago
Subscribe
Unsubscribe
שבועי
Let’s Drone Out is a lighthearted chatty drone-focussed podcast. and radio show covering anything and everything drone-related! Recorded live and interactively every Thursday 8-9 pm UK time on Youtube, come join the interactive chat. Jack and his wife Tony, as well as the rest of the LDO crew, are here to bring together everyone from noob FPV’ers to pro commercial aerial photographers; keeping tabs on the latest tech, legal, events and drone news, talking to the people behind the headlines a ...
T
The Autoblog Podcast

32m ago32m ago
Subscribe
Unsubscribe
שבועי
The Autoblog Podcast is one of the oldest and most-listened to automotive podcasts anywhere. The show features a rotating panel of editors and guests hosted by Editor-in-Chief Greg Migliore. The gloves come off and the lively discussion has everything from the most important news of the week to the best and worst cars we're driving. The show traditionally wraps with the popular Spend My Money segment. With nearly 700 episodes, the podcast is a must-listen for automotive enthusiasts everywhere.
K
KZradio הקצה

1h ago1h ago
Subscribe
Unsubscribe
שבועי
Join our experts at the Consumer Reports Test Track as they discuss cars, answer buying questions, and share insights on everything automotive.
J
Jimquisition

8m ago8m ago
Subscribe
Unsubscribe
שבועי
Is it best that our food is Local and Organic or Big and Conventional? Our view is “Both, and..” We don’t come to the table with a bias, except that good farming like good food comes in all shapes and sizes. Farm to Table Talk explores issues and the growing interest in the story of how and where the food on our tables is produced, processed and marketed. The host, Rodger Wasson is a food and agriculture veteran. Although he was the first of his family to leave the grain and livestock farm a ...
T
The Best of Car Talk

3h ago3h ago
Subscribe
Unsubscribe
שבועי+
America's funniest auto mechanics take calls from weary car owners all over the country, and crack wise while they diagnose Dodges and dismiss Diahatsus. You don't have to know anything about cars to love this one hour weekly laugh fest.
C
CarCast

22h ago22h ago
Subscribe
Unsubscribe
שבועי
Jump in the Funhaus Podcast -- all the gaming, nerd culture, and meat-packing industry commentary you can handle. Watch LIVE every Tuesday at 4PM CT on svod.roosterteeth.com. Watch the free video version at YouTube.com/Funhaus.
תקשיבו ל-500+ נושאים